What happens when your dad goes to work one day and doesn’t come home?

‘We waited and waited for him,’ says the person, who decided the murdered man would not be forgotten.

And years later the memory of Detective Sergeant Helen Carter’s father comes back to haunt her when her first job in CID is a murder inquiry. 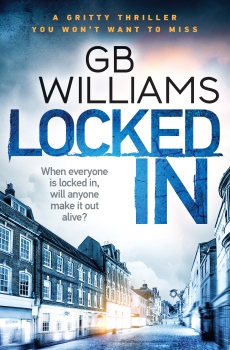 Talk about surprises! When I left former policeman-cum-convicted murderer Charlie Bell, in Locked Up, the debut crime thriller from GB Williams, he was no longer behind bars and starting to re-build his life.

Not quite sure what I expected would happen next. But I certainly didn’t think he’d become involved in a bank heist.

Nor, I suspect, did prison warder Ariadne Teddington, who became involved with Charlie when she recruited him to help her investigate a prison killing.