I was reluctant to add to the praise of this author – or like her book. I mean Sally Rooney has already had most of the plaudits that can be thrown at a young debut writer: shortlisted for a string of book awards, and winner of others including the Costa Novel of the Year, and long listed for the Man Booker Prize as well as the Women’s Prize for Fiction.

She’s published by Faber & Faber who can afford to throw money at her marketing and promotion. She’s young and she comes from County Mayo so she ticks boxes (age and un-London).

And in the book she’s writing something that would seem to me to be a coming of age story featuring two unlikely teenagers.

She uses the present tense. And she doesn’t use quotation marks.

Really? How can I, riven as I am with (ahem) preconceived ideas and resentment, like this author and this book?

Childishly, I thought: Oh, come on.

But Sally Rooney has created something extraordinary in Normal People, where the reader must surely question what’s normal and what’s not.

Sure, the relationship between Marianne and Connell is unlikely given that one is a seriously unpopular and bullied schoolgirl and the other a well-liked, sporty and good looking boy (for goodness’ sake, even his teacher fancies him).

So, if you remember your school day crushes, anxieties and hang-ups, you’ll probably agree that these two were never meant to be together. And, although they’re not – in the traditional sense – they are in a basic way.

But it’s more about the conversations that go on between the two – and, cleverly, what’s unsaid; what they don’t say or admit to each other – that reveals so much about the pair.

The dynamic of the relationship operates in the emotional reaction of each character in response to the situation in which they find themselves. And that emotional reaction is founded on their separate and completely different upbringings: Marianne’s cruel and cold life where we’re left to imagine the silently tolerated violence, and Connell’s single parent and loving home.

As the relationship unfolds, we want to beg each character to ignore their so-called normal school mates and say and do what they think and feel, rather than imagine how they must look to these other people. 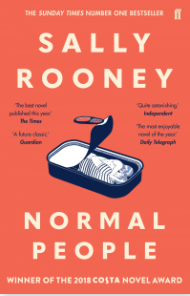 Is this a book about being judged? Is it the story of how we change our behaviour to fit in with the so-called norm? If it is, then what are we to make of the realisation at the end that the ‘normals’ knew about Marianne and Connell’s relationship and, yes, did judge them, but then got on with their own lives.

But while the pair are consumed with what others think of them – Marianne to the point of dismissing most people around her as irrelevant – do they give a thought to why other so-called normal people behave the way they do?

Marianne deals with the bullying she suffers by adopting a persona of superior indifference until, when she’s older, she hears devastating news about Rob, one of those who used to attack her. She comes to understand that he was an insecure person, obsessed with being popular and it was this desperation that made him cruel. When Rob was forced to confront his actions, he couldn’t cope.

As Marianne says: ‘You learn nothing very profound about yourself simply by being bullied; but by bullying someone else you learn something you can never forget.’