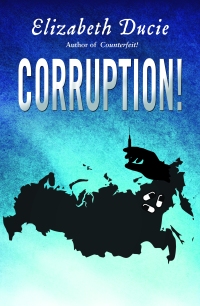 The phrase ‘O, what a tangled web we weave when first we practise to deceive…’ might have been coined especially for Elizabeth Dulcie’s new thriller Corruption!

It wasn’t, of course, the quote is a line from Sir Walter Scott’s 1808 poem, Marmion, but it does provide a perfect summary of the plot of this third, and final instalment, of Dulcie’s Suzanne Jones series.

Corruption! is a more-ish deliciously twisty tangle of deception and false trails and crooks masquerading as caring family men.

The action switches between London and Moscow where former MP Francine Matheson, an old friend of Suzanne and her sister and business partner Charlie, is worried about her friend, pharmaceutical boss Anton Dimitriov.

Out of fear. Out of greed. Out of evil. Corruption springs from many roots.

Teenagers fall prey to a deadly new drug craze sweeping across Russia. Pharmaceuticals destined for Africa turn up on the backstreets of Moscow, St Petersburg and Vladivostok. Regulator Suzanne Jones and her sister, Charlie, fight to stop the pushers before more kids die.

But will their discoveries mean a friend goes to prison? And are they putting their loved ones in danger?

With old adversaries and surprising new allies, the Jones sisters face their toughest challenge to date. The heart-stopping final episode in the Suzanne Jones series of thrillers set in the sometimes murky world of international pharmaceuticals.

There’s something dodgy going on with his company and though Francine is convinced he’s innocent she wants to get to the bottom of things.

Naturally, she asks the Jones sisters to investigate which, in turn, takes the reader on a rollercoaster of a read.

Dulcie’s knowledge of the international pharmaceutical industry makes the complex plot both satisfying and worryingly plausible.

A past adversary, plus an old flame, from the two earlier novels add to the action as Dulcie concludes the series by tying up what appear to be several loose threads.

It all adds up to a satisfying conclusion although it’s disappointing that Corruption! is the final outing for the Jones girls. It felt to me as if the series had potential for further development and I’d have liked to see what happens next to the sisters.

Available to buy here and Amazon.

When Elizabeth Ducie had been working in the international pharmaceutical industry for nearly thirty years, she decided she’d like to take a break from technical writing —text books, articles and training modules — and write about some of her travel experiences instead.

She took some courses in creative writing and discovered, to her surprise, she was happier, and more successful, writing fiction than memoirs or life-writing.

In 2012, she gave up the day job, and started writing full-time.

She has published three novels, three collections of short stories and a series of manuals on business skills for writers.