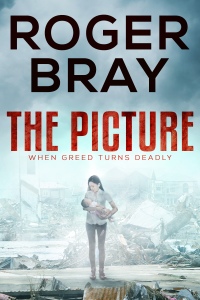 Life, says Roger Bray, author of The Picture, is an endless adventure.

And he’s had plenty of adventures – serving in the navy, fighting in wars and, finally, as a police officer, where he was medically retired after sustaining a serious injury protecting a woman in a domestic violence incident.

A period of depression followed. But he firmly believes that when one door closes, another opens. So, he enrolled in college and studied for bachelor and master degrees where, alongside the qualifications, he discovered an unexpected bonus.

‘The process of learning, of getting words down onto the page again relit my passion for writing in a way I hadn’t felt since high school.’

He’s drawn on some of his adventures in his writing.

‘Where it will take me I have no idea,’ he says, ‘but I am going to enjoy getting there, and if my writing can bring some small pleasure into people’s lives along the way, then I consider that I will have succeeded in life.’ 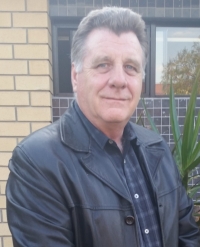 My family: Married for 30+ years and with three grown children

I was born in…. England, just north of London but was raised in Blackburn, Lancashire. But now live in… Queensland, Australia

One thing I’d change about me… Inability to even look at a recipe book without gaining weight.

One thing I wouldn’t… My sense of humour, which admittedly has got me in strife at times, but I thought it was funny :o)

Earliest childhood memory?  Christmas, aged about four.  Coming down on cold Christmas morning to presents under the tree.  The smell of pine and then a zillion pine needles stabbing into bare feet.

Best thing about my life? My wife, my children, my Triumph Thunderbird, my wife’s overly cute cat and my recent decision to write full time.

Worst thing? Getting older and realising all the cheques I’ve written to my body are coming due.

A warehouse in Japan used as an emergency shelter in the aftermath of the 2011 Tsunami.

A distraught, young Japanese woman in dishevelled clothes sits on a box, holding her infant daughter. Ben, a US rescue volunteer, kneels in front of her offering comfort. They hug, the baby between them.

The moment turns into an hour as the woman sobs into his shoulder; mourning the loss of her husband, her home, the life she knew.

A picture is taken, capturing the moment. It becomes a symbol; of help freely given and of the hope of the survivors. The faces in the picture cannot be recognised, and that is how Ben likes it.

No celebrity, thanks not required.

But others believe that being identified as the person in the picture is their path to fame and fortune.

Ben stands, unknowingly, in their way, but nothing a contract killing cannot fix.

What keeps you awake at night?  I was medically retired as a police officer after suffering a serious back injury.  Often the recurring pain from that keeps me awake.  Thoughts that keep me awake?  To be honest not much, I am lot more philosophical than I used to be about worrying about things.

How many hours a day do you spend on your phone?  Less than one.  My phone, to me, is a tool which lets me make phone calls when convenient.  I actually hate the idea of being instantly contactable 24 hours a day.

Star Wars or Star Trek?  I used to enjoy the old Star Trek with its over the top acting and dodgy sets, I think it lost something along the way after that.  Star Wars, loved the originals, didn’t much like the ‘prequels’ and the jury is still out on the new reboot.

What’s in your bag right now?  I don’t often carry a bag, my wife’s, however, is like the magical entrance to Narnia.

Favourite meal?  In general a good lamb madras, but as lamb seems to be becoming an endangered species in Australia, if the price is anything to go by, a lot of places don’t make it any more.

Go-to companion for a night on the sofa?  My wife, unless she asks, continually, what is happening in a movie we are both watching for the first time.  My wife’s cat, until he gets bored and decides to jihad my arm.

What you don’t know about me?  Quite a lot I guess, but I am a great believer in a fair and just society and people ‘doing the right thing’.

My guilty secret?  See question about extravagance + I do enjoy a good cigar with my bourbon, but due to feckless Australian governments, a good cigar is hard to find that doesn’t cost the equivalent of the GDP of a small African nation.

The Picture is available to buy on Amazon.