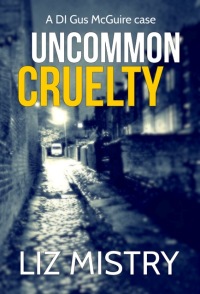 It wasn’t until I sat down to write this review that the full significance of the title of the fourth novel in Liz Mistry’s DI Gus McGuire series struck home.

But DO read Uncommon Cruelty and find out.

And, if this multi-layered, multi-voiced crime procedural doesn’t keeping you guessing right to the end, I’ll eat my hat.

The dreadlocked McGuire isn’t a typical copper – he can’t stand the sight of blood for one thing, which is a bit of a handicap when he has to attend an autopsy.

DI Gus McGuire and his team are called in to investigate the disappearance of a teenage boy after his parents return from a weekend away, to find their home trashed and their son missing.

But that is just the beginning.

As the investigation unfolds, Gus must discover what links a violent bikers’ gang, a Muslim youth group and a fundamentalist American based Christian church.

Alongside this, two cases from the past come back to haunt DI Gus McGuire and his DS, Alice Cooper.

Gus has a lot to juggle, but will he cope?

Between them they’re an engaging team, doggedly determined to find out just what happened when a teenage party went seriously wrong.

Set in Bradford in West Yorkshire and billed as gritty Northern noir this is a murder-cum-psychological thriller that also provides insights into what it means to be a teenager in one of Britain’s most multi-cultural cities.