A. Claire Everward, The First 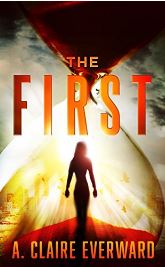 It’s not often I turn the last page of a book and think: ‘Hmmm, I’m not really sure what I think.’

But that’s the effect The First, a debut novel from A. Claire Everward had on me.

There’s a lot that I liked: the plot, for instance, is unusual and intriguing.

Aelia returns from a vacation that did not go quite as she expected, to a life she does not feel at home in but that is, at least, hers.

Or so she thinks.

However, within days of returning she is targeted by a hit man and she has no idea why. But then, neither does he.

All Kyle Rhys knows is that to protect humanity, this woman must die. Killing her should be easy: the organization that raised him has prepared him for her death his entire life.

So why can’t he kill her?

In an impossible turn of events, both killer and target find themselves on the run from people who will stop at nothing to destroy them, seeking sanctuary with a community where they discover a secret that will overturn their entire world, taking their identities from them forever.

But, although there’s clearly something mysterious about Aelia and the powerful attraction that sparks between her and Kyle, the plot doesn’t completely live up to its promise.

Sure, Kyle is a satisfyingly charismatic hero – caring and thoughtful, with a measured intelligence and strength.

It’s a little harder to warm to Aelia, who is a little other-worldly, which sometimes makes her seem passive and unassertive. On the other hand, she’s not afraid to speak up for herself when necessary and faced by a man threatening to kill her confronts him bravely.

The story alternates between their two voices with occasional interjections from their pursuers.

For me, this is always a good thing – I enjoy a story that presents multiple viewpoints as long as the author doesn’t switch point of view mid-chapter which Everward mostly avoids.

So, given these positives, why do I feel so conflicted?

I’ve given this a lot of thought and have come to the conclusion that it’s all the fault of the blurb, which to me suggested The First was an action-packed thriller – a supposition borne out by the opening chapters where I counted at least three bodies.

But once Aelia and Kyle reach their place of sanctuary, the action stops and instead readers are presented with a moralistic struggle between good and evil – which is confusing.

Admittedly, Everward’s reflective, measured writing – she tells rather than shows – is better suited to the more thoughtful moral tale.

But I was expecting a thriller!

I’m sure lots of readers will enjoy Everward’s style of story-telling – she writes well and with confidence – and will invest in The First and Aelia and Kyle’s fight to save their new community from impending doom.

Sadly, though, I thought I was getting something with a bit of fizz, and this just wasn’t my cup of tea.

1 thought on “Review: The First from A. Claire Everward marks a new struggle between good and evil”