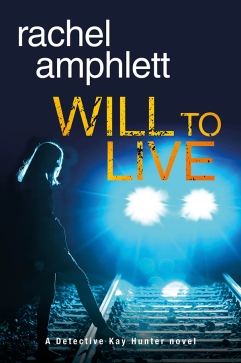 As a little girl I loved silent movies – oh, the edge of the seat excitement when the dastardly villain tied the  platinum blonde heroine to the rail track and gleefully ran off as the puffing Billy engine advanced inexorably.

Would the beautiful blonde perish?

Or would the hero save her in the nick of time?

As a bloodthirsty nine-year-old I never really understood the fatal, bloody implications of the what if…which, perhaps, made the opening chapter of Rachel Amphlett’s new crime thriller Will to Live, the second book in her Detective Sergeant Kay Hunter crime thriller series, all the more shocking.

Because nothing is left to the imagination – the anguished cries of the terrified victim, the roar of the approaching commuter train and the frantic efforts of a dog walker to save him.

There may be more exciting ways to open a murder mystery – but offhand none come to mind.

And the pace doesn’t let up.

This is a ‘just one more chapter’ book …well-researched and sparingly well-written with a very effective use of word pictures – the dog walker ‘screwed up her eyes in a vain attempt to shut out the vision before her, a moment too late’.

Some writers would have provided a detailed description but, for Amphlett, less is more.

The plot too hooks from the start: at first, DS Kay and her colleagues assume the railway death is another suicide on a stretch of line known as ‘Suicide Mile’.

But as Kay’s investigations continue, and a second murder takes place within a week of the first, she realises a brutal serial killer is at work.

And the race is on to find the murderer before he kills again.

This is a tantalising whodunit – and, though I worked out the identity of the killer, a little ahead of Kay and her team, the writing was so good I didn’t feel cheated by the ending.

However, the sub-plot, revolving around a secret adversary with a professional grudge against Kay, was a tantalising tease that never quite delivered.

But maybe it’s a slow burner that will gather momentum in the next instalment?

Looking forward to finding out.

PS And, yes, film buffs, the villain typing a victim to the railroad tracks is a bit of a silent movie myth and was almost as rare as hen’s teeth. But it happened just often enough to make a big impression on little me.

2 thoughts on “﻿Review: Miles of thrills in Rachel Amphlett’s new murder mystery Will to Live”