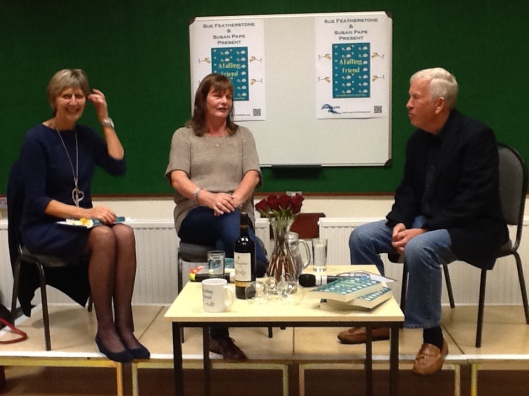 You would forgive us for being a tad nervous about our appearance at our first literary festival. We’d given quite a few talks since the publication of our debut novel, A Falling Friend, but these were to small, friendly book groups, WIs and other such meetings.

Getting a gig at the prestigious Ilkley Literature Festival Fringe was a coup and we were delighted to be offered a prime Saturday evening slot.

Former ITV Yorkshire Calendar presenter, Geoff Druett (pictured with us above), kindly agreed to act as host and interviewer, but also to stop us going off track and talking too much.

We went armed with copies of the book – to sell – and some goodies that included Falling Friend mugs, bookmarks, wine and chocolate – to give away.

We chose as a topic the power of female friendship in literature and discussed various books in which female friendship was highlighted – from sisters and groups of women, to stories where individuals are friends.

It was in the latter category that we were able to bring in and talk about the friendship between Teri and Lee, the two main protagonists in A Falling Friend.

Questions from the audience included how we managed to write together. We explained that we took a key character each and used distinct voices to differentiate between the two. We also said that we didn’t sit in an office together, but emailed chapters backwards and forwards between Sue’s home in Wakefield and Susan’s in Leeds.

The audience liked the idea that we often surprised or shocked each other with what we’d written. Although we worked out a plot at the start of writing the novel, once we both sat down at our keyboards, the story seemed to go off in a direction of its own.

The audience also asked about our publishing company Lakewater Press – run by the woman who edited our original manuscript, Kate Foster.

We were able to say that although based in Australia, we’ve had as much support and encouragement as we would have done from any publisher based in the UK.

One final question from the audience was whether we would choose to write separately. Our answer to that one is: ‘Why would we want to?’