First, a confession: this list is a steal – an idea borrowed from my friends John Jackson and Paul Smith, who recently posted similar records of achievement on Facebook.

Meeting my granddaughter Iris for the first time

Sorry, I lied: this is definitely number one on my list.

Iris has enriched my life in ways I could never imagine, and it’s been an unexpected delight to watch my eldest daughter, Megan, blossom as a mum.

Travelling Down Under to visit my youngest daughter, Annie, during her gap year-and-a-half in Australia

Next time, I’ll fly business class and stay for longer than four weeks, but in all other respects, it was a wonderful holiday – although saying goodbye to Annie at the end of the trip was heart-breaking.

Getting a book deal with Lakewater Press

Me and co-author Susan Pape couldn’t believe our luck when publisher Kate Foster wanted to sign us. We’ll be eternally grateful to her for helping us achieve our dream and, after writing two journalism text books together, finally publishing our first novel A Falling Friend.

Taking delivery of the first copies of A Falling Friend

I’ve got two left feet, but I channelled my inner Ginger Rogers in a joyful twirl around the kitchen – although, Ginger, who usually twirled backwards and in high heels, would probably have been rather more graceful.

And can you imagine the jig when we got a mention in both the Yorkshire Post (right) and Bella magazine?

No. Perhaps, best not.

This was a tough one. It was a dream of a job – lovely students and a great staff team, but Susan and I were in the middle of writing our second novel A Forsaken Friend and, increasingly, my head was in a fictional cloud rather than in the corridors of academia.

No, not a typo or an admission of brainlessness…I’m a founder member of Knitwits, a group of eight friends who, for the last three-and-a-half years have met up every Saturday morning to knit and natter and put the world to rights.

Our oldest natterer is in her seventies, whilst the youngest two are half her age and the rest of us somewhere in between. Topics of conversation range from Boris Johnson and Donald Trump (not fans of either) to prison visiting, Thai lady girls and turning the heel of a sock.

Joining a Gossip of Yorkshire Authors

Or to put it another way, being part of a team (right) from the Promoting Yorkshire Authors group, who, this autumn, debuted at the Ilkley Literature Fringe Festival with a fast-paced performance – six novels, seven Yorkshire authors and a stirring mix of history, poetry, humour, pathos and fantasy.

It was huge fun and the audience laughed in all the right places.

Twice the distance covered by Scottish band The Proclaimers…and also the annual Country Walking magazine challenge to walk 1,000 miles in a year. Sounds a lot but, as I found at my first attempt in 2018, achievable by anyone who’s reasonably active – even me.

So, this year I’m going to up the ante by doubling the distance – after all, it’s just a matter of putting one foot in front of the other. Isn’t it? 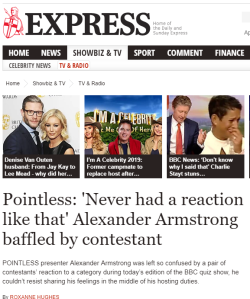 Armstrong was, according to the Express Online, slightly nonplussed by my consternation.

‘We’ve never had a reaction like this before,’ he said.

Doubtless – although that was largely because I know more about periodicals than I do about the periodic table.

Nonetheless, my last minute cramming on the train down to London paid off and, whilst I didn’t get a Pointless answer, I didn’t get a big fat zero either.

4 thoughts on “Viewpoint: Ten memorable moments from the last decade”