There have been lots of messages on Twitter and Facebook about when writers started to write fiction with the emphasis being on those who didn’t start ‘seriously’ until they’d given up full-time, paid employment.

It seems a remarkable number waited until they retired before feeling they had the time (and the financial resources) to take up writing – even if writing was something they’d wanted to do since they were young.

A lot of us were unable to give up (paid) work to write as writing fiction does not pay well – unless you are JK Rowling, a super successful debut novelist who strikes it lucky, or a celebrity (who doesn’t count as he/she probably had a ghost writer).

Then there’s the problem of ‘real’ life getting in the way. How many of us have the energy to write several thousand words after a hard day’s work when there’s shopping, cooking, washing and bed making to be done – and kids and elderly relatives to look after.

Exhaustion is a real brake to writing.

For me, fiction was a no-no even though I’ve been writing stories since I was in primary school. I was a newspaper reporter and, as such, needed to tell a good ‘story’ to interest and keep the reader, but had to stick to the facts and not let my imagination come into play. 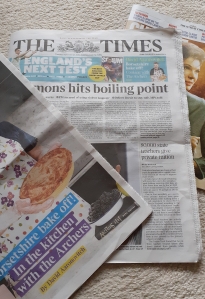 Newspapers and magazines have a particular style of writing

Newspaper and magazines have particular styles of writing and once you’ve had that in your head all day it’s difficult to write fiction as your brain is stuck in the rhythm of ‘news’ or ‘feature writing’.

Even when I had two books published – written with my co-author, Sue Featherstone – they weren’t fiction but academic text books.

We were both teaching journalism at two of Yorkshire’s universities so we were primarily writing for a graduate and postgraduate audience.

But the success of those two books (below) encouraged us.

We thought, wouldn’t it be fun to write a novel together.

We plotted over pizza at an Italian restaurant in Wakefield (where Sue lives) or, if we were feeling flush, Harvey Nicks café in Leeds (near where I live).

But it meant a snatched couple of hours in between lecturing and getting on with our ‘real’ lives.

How we managed to come up with a story with twists, turns and cliff hangers, plus 100,000 words, I cannot understand. Although by then, I was working a three-day week so could devote more time, while still – luckily – getting a salary.

But that was just the writing.

We also had to look for an agent, an editor, a designer – and, heaven help us – a publisher.

Oddly, not one of the handful of agents we approached was interested in these two bluestockings, both in their fifties, despite our being published authors who knew a thing or two about writing and could use grammar properly, and – excuse my modesty – had a brilliant story to tell.

We promoted ourselves through social media (and isn’t that hard work – constantly thinking of interesting/amusing/useful things to say on Twitter and Facebook?)

It was eventually through Twitter that we met our brilliant editor, Kate Foster, who later took us on when she set up her publishing company – Lakewater Press. 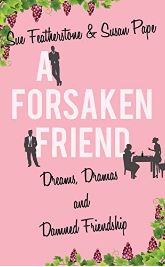 It helps that Sue and I have both given up full time work now, and we can devote lots more time to writing.

Our first two novels (pictured left) will be joined by the third book in our Friends trilogy, due out in November.

We’ve not found overnight success but we’re lucky to have built up a social media following – and an enthusiastic readership – and we’ve sold some books along the way too.

The fact that we’ve not found fame and glamour now we’re in our sixties does not stop me being thrilled when I hear of other women who didn’t start writing until their fifties, sixties and seventies – and even older – and who’ve found success (and if not success, then the sheer satisfaction of achieving that amazing goal: writing a novel).

One Twitter author recently posted that she started writing in her forties and has now had ten books published. You GO girl.

Women doing it for themselves

Meanwhile, Sunday Times columnist India Knight reckons there’s a real movement amongst recently retired women who say their time has come – they’ve worked, brought up a family and now want to do something for themselves.

‘Part of it is to do with third acts,’ she says. ‘There is a sense that time is marching on and that you need to set about actually doing the longed-for activity.’

India talks about the women whose families have up and left the nest, which might be a reason for some women to take up knitting, tapestry, serious baking or singing in a choir to fill the time.

But I think it’s more than that.

Women have talent and skills, and want to display and use them. They want to be creative.

By all means, get on that potter’s wheel, pick up a ukulele (I did) or take up knitting.

But if the notion has always appealed, get writing the novel that’s been locked away inside your head for so many years.

4 thoughts on “Viewpoint: When did you start to write? Have you joined a band of authors who left it until they’d retired?”