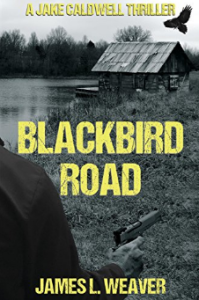 What happens when you read a book that’s so good, you can’t find the words to adequately describe how much you enjoyed it?

You procrastinate – and six months down the line, you still haven’t posted a review.

Because all I really need to say about Blackbird Road, the third novel in James L. Weaver’s Jake Caldwell series, is that it’s a cracking thriller with great characters.

And I LOVED it.

With his wedding day fast approaching and his PI boss heading out of town, ex-mob enforcer Jake Caldwell decides to take one more job before a much needed vacation. But in a matter of days, his client is assassinated, and her six-year-old son kidnapped.

With just a few clues, Jake calls on old friends to help track down the person responsible. Only this time his fiancée Maggie, desperate for Jake to leave his violent history behind, can’t guarantee she’ll be there when, or if, he comes home.

But Jake can’t turn his back on those who need him. It’s in his blood.

A perilous plot of lies and secrets unfolds, and Jake encounters criminals more brutal than ever. And when a threat to thousands of innocent lives is uncovered, Jake once again dives back into his past, requesting favours from some unexpected and unsavoury contacts.

Jake needs to stay one step ahead of the bad guys if he’s to have any future at all.

The third book in the award-winning JAKE CALDWELL series is an intense, complex, and frantic race against time. Weaver has done it again in this raw and riveting read set in the Ozarks.

Caldwell made his debut in 2016’s Poor Boy Road when he first returned to the small town in America’s rural mid-west which he’d left as a troubled teen.

A tough guy, with a strong moral compass, he’s now re-inventing himself as a private investigator. But trouble never seems far away…

The plots are as twisty, gritty and scarily real as anything you’d expect to find in the rather better known Jack Reacher series by Lee Child.

Weaver’s writing is always restrained and fluent and Caldwell, his fiancé Maggie and best friend Bear are sympathetic and believable.

Can’t wait to find out what happens next.