What happens when the good man you married isn’t all he seems to be?

In fact, he’s much, much worse than Katerina Rowe, a church deacon in the historic plague village of Eyam, could ever imagine.

And the tension is palpable as Kat slowly realises her life is built on a lie and Leon, the husband she adores, is a crook and a scoundrel.

But is he also a murderer?

Katerina Rowe, a deacon at the church in the sleepy village of Eyam, has a fulfilled life. She is happily married to Leon and her work is rewarding.

But everything changes when she discovers the body of a man and a badly beaten woman, Beth, in the alleyway behind her husband’s pharmacy.

Drawn to the young woman she saved, Kat finds herself embroiled in a baffling mystery.

When Beth’s house is set on fire, Kat offers the young woman sanctuary in her home and soon the pair begin investigating the murder, with some help from Beth’s feisty grandmother, Doris.

But neither the police, nor Leon, nor the criminals want Kat and Beth looking into their affairs and the sleuths quickly find themselves out of their depth…

Can Kat and Beth solve the mystery and walk away unscathed?

With a number of psychological thrillers under her belt, Waller is adept at keeping the reader guessing – just what is the link between a group of teenagers and the gangland killing of a wealthy and good-looking pharmacist, who also happens to be a rival of Leon’s?

And, although the identity of the murderer didn’t come as a big surprise, the real cliffhanger concerns Kat and Leon’s relationship.

What will happen when she finally finds out the truth about Leon? And how will he react?

Waller has left enough loose ends and unfinished business to guarantee you’ll want to read the next instalment of the Kat and Mouse trilogy.

Anita Waller was born in Sheffield, South Yorkshire in 1946. She married Dave in 1967 and they have three adult children.

She began writing when she was around 8 years of age, writing ‘compositions’ at junior school that became books with chapters. 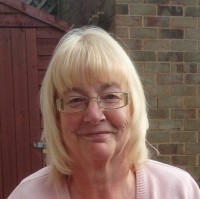 In 1995 she sent Beautiful to a publisher, and as they reached the contract stage the publisher went into liquidation. As a result, the book was consigned to the attic in dejected disgust but in 2013 it was dragged out again for an enforced complete re-type.

The original was written on an Amstrad 8256 and the only thing that remained was one hard copy.

Anita is not a typist and it was painfully reworked over two years, submitted to Bloodhound Books who, within three days of reading it, offered her a contract. It was released into the world on August 31, 2015.

Following the outstanding success of Beautiful, Anita began a sequel on December 27, 2015, finishing it on March 19, 2016. It was published as The new novel, Angel, was launched on May 2016.

Anita’s next novel, 34 Days followed, in October 2016. This was a huge success, particularly in the United States.

While this, her third psychological thriller, was flying out in all directions, she began work on her fourth book, Winterscroft, a supernatural tale, set in Castleton, Derbyshire, and published in February 2017.

A sequel to 34 Days followed next: Strategy was published in August 2017.

Anita’s next book, Captor, another a psychological thriller, and set exclusively in Sheffield, was launched in February 2018. It was an instant success, both in the UK and the US.

Then along came Game Players, once more set in Sheffield. The story involves a group of six children and explores the darker, criminal side of Sheffield. It was launched in May 2018.

And now she is hard at work on her first series, the Kat and Mouse trilogy, set in the beautiful Derbyshire village of Eyam. The first in the series, Murder Undeniable, was published on December 10, 2018.

In her life away from the computer in the corner of her kitchen, Anita is a Sheffield Wednesday supporter, who swears blue blood runs in her veins.