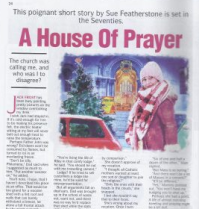 Christmas came early to the Featherstone household this morning when the postman brought a very special present: The People’s Friend Christmas Special, featuring my short story A House of Prayer.

I’ve been floating on clouds ever since.

Ever since I was a little girl, and used to curl up in a corner to read my grandmother’s My Weekly magazine, I’ve dreamed of becoming a writer and seeing my byline in print.

As a former journalist, I’ve achieved that ambition many times over – lucky me!

However, like so many newspaper people, I’ve always wondered if I could turn my writing fingers to fiction.

And, yes, two-and-a-half years ago I proved I could when my first novel A Falling Friend, co-authored with writing partner Susan Pape, was published by Lakewater Press.

Since then we’ve published a follow-up, A Forsaken Friend, and are currently editing a third, A Forgiven Friend, scheduled for publication in spring 2019.

And we’re also working on a fourth, provisionally titled The Friday Night Knitting Club, which, you’ve guessed it, features a group of women who knit.

As every writer knows, there’s nothing quite as thrilling as seeing YOUR name on the cover of a book you’ve written.

So, last autumn I gave it a go – and penned a story inspired by a personal experience feature I’d read in The Guardian newspaper’s Saturday magazine about a priest, who found a newborn baby in his church’s Christmas crib.

I tweaked the details, added a no-nonsense teenager, loosely based on one of the minor characters in mine and Susan’s Friends trilogy, and, because I’m an avid reader of The People’s Friend, in my opinion, one of the best short story magazines currently on sale, took a deep breath and sent it off to their fiction editor Shirley Blair.

And she accepted it!

For the 2018 Christmas Special.

It’s been a long twelve months – but, oh, when I held the magazine in my hands this morning, I felt as if all my Christmases had come at once.

The People’s Friend Christmas Special 2018 is on sale now.