@PaulaHouseman, @rararesources, Odyssey in a Teacup 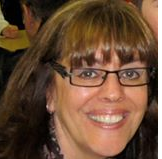 Author Paula Houseman was once a graphic designer.

But when the temptation to include ‘the finger’ as part of a logo for a forward-moving women’s company proved too much, she knew it was time to give up design.

Instead, she took up writing.

Her love of satire, combined with a fondness for double entendres, means her novels – earthy chick lit and romantic comedy – are a tad Monty Pythonesque.

‘But,’ says Houseman, whose Ruth Roth series features a humourless schoolmarm with an unfortunate name and monstrous yellow incisors, ‘satire helps defuse all those gaffes and thoughts that no one is too proud of.’

Series opener Odyessy in a Teacup introduces Ruth, whose hankering for an ordinary life takes her on a personal odyssey that threatens to start the mother of all wars.

Now, let’s meet Paula Houseman and find out what makes her tick…

My name: Paula Houseman. Sorry, only two words—I didn’t get a middle name. That in itself inspired a sub-theme in my books.

My family: One husband, two adult children, a son-in-law, three grandsons. The dogs have long gone.

I was born in… Adelaide. It’s South Australia’s capital city but it’s been referred to as an overgrown country town.

To my teenage self, it felt like a one-horse town. The street lights went out at 10pm, for God’s sake! I couldn’t wait to move away.

But now live in…Sydney, capital of New South Wales. My husband’s a Sydneyite, so I moved here when we got engaged. It’s noisy and crowded, and I’m now hankering for the sleepy town.

I like my home because… It’s my ‘workshop’ and my sanctuary. But I came across a HipDict quote on Instagram that perfectly encapsulates the concept of home: ‘Home (n.) Place where you can look ugly and enjoy it.’

One thing I’d change about me… In an increasingly superficial and artificial culture—made even more so by social media—there’s the temptation to want to be thinner, taller, prettier, wealthier; to have more ‘friends’, retweets, likes, shares.

But the thing I want to change about me is my perception. That desire is a constant, and that change is an ongoing process. It’s much more challenging than scratching the surface, because changing the way I see things means digging deep. It’s always worth it, though.

Mind you, if I did change anything physical, it would be my ears. They could rival Dumbo’s.

Best holiday? I’ve had lots of ‘best’ holidays, and they’re all tropical ones. One of my happiest holiday memories is the time my family went to Broadbeach—near Surfers Paradise on the Gold Coast (Queensland)—when I was nine years old.

It was such a sensory experience that all these years on, I still remember waking up to the sound and scent of the sea. And I remember the taste of the crispy roasted chicken, freshly-baked bread loaf and the real buttermilk my father used to buy for lunch from the local shops.

It was a family-friendly holiday with its daily games and activities, and the nightly entertainment—the theme parties: fancy dress, mad hatters, hula, talent contest.

Worst?  A return trip from Singapore to Australia by boat; sailing past Christmas Island, which was experiencing a tropical cyclone.

It was in the days before cruise ships had the kind of stabilisers they have now. The waves were supposedly twenty feet high, the boat was rolling and pitching.

This holiday was also a sensory experience. I still remember the sound and scent of the sea, and the taste of everything on its way back up and out.

It’s left me cruise-shy. And maybe modern stabilisers can reduce roll and pitch, but hellooo, a cyclone is still a cyclone!

Earliest childhood memory?  There are many, but a particular traumatic one stands out. A dark and terrifying experience of being locked in a tool shed at kindergarten by a boy—he, only three years old and already a tool.

Favourite film?  ‘How to Lose a Guy in Ten Days’ and ‘The Ugly Truth’ are vying for the spot. I love Kate Hudson and Katherine Heigl.

Matthew McConaughey and Gerard Butler are a bit of all right too.

Favourite writer?  That changes as I discover new ones. I’m fickle like that.

It used to be Harlan Coben, then Lee Child, then Michael Connelly, then David Baldacci.

But I think Sandra Brown has it. I’m a sucker for a good whodunnit, and Brown’s stories add another dimension. They’re supercharged romantic suspense.

Favourite book to read with my children?

Using the power of rhythm and rhyme to spur the imagination, Theodor Seuss Geisel was a genius. His timeless stories still entertain kids, but they also entertain adults because he managed to incorporate his subversive views in them.

Love his characters, love his illustrations.

The twenty-seven publishers who rejected him before his work finally got picked up were probably kicking themselves up the wazoo till the bitter end.

What’s in your bag right now?

Too much. I like to have what I call my ‘just-in-cases’: wallet, water bottle, glasses case, brush, lipstick, pocket tissues, notebook, pen, compact mirror, nail file, tweezers (you never know when you’re going to need to pluck), a small bag of assorted nuts (in case I need to eat), a container of slippery elm (in case I get indigestion after I’ve eaten), a shoe horn (huh?), my mobile phone.

My bag is heavy!

Go-to companion for a night on the sofa?

I am way, way past that. I need to sleep in my bed. If anyone ends up on the sofa, it’s my husband, and that’s only because I snore. So he says. But men lie.

What you don’t know about me?

Plenty. But for an author, show is always better than tell. The best way to find out about me is to read my books, bearing in mind that there’s a fine line between reality and fiction.

Just as well I write chick lit and romantic comedy. Not murder.

About Odyssey in a Teacup:

Encounters with a pair of supersized Y-fronts; a humourless schoolmarm with an unfortunate name and monstrous yellow incisors; and a tut-tutting, big-breasted, modern-day gorgon are the norm for Ruth Roth. She’s used to crazy.

Her mum squawks like a harpy and her dad has a dodgy moral compass. Add in daily face-offs with a relentlessly bitchy mirror, and Ruth’s home life feels like a Greek tragicomedy.

She hankers for the ordinary. But blah is not a good fit for someone who doesn’t fit in. And isn’t meant to.

Ruth’s vanilla existence is an issue for her besties—her hot-looking, obsessive-compulsive cousin and soul mate (who needs to do everything twice-twice), and her two closest girlfriends.

With their encouragement and a good homoeopathic dose of ancient mythology, Ruth embarks on an odyssey to retrieve her spirit. She’s confronted with her biggest challenge ever, though, when one of these friends sends her spiralling back into a dark place.

The decision she must make can either bring her out or launch the mother of all wars in her world.