AJ Waines, Don't You Dare, Girl on a Train 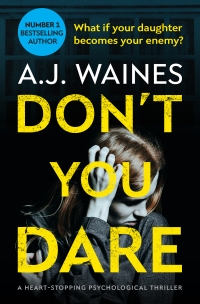 It’s every woman’s nightmare: to slip the key into the lock and realise there’s an intruder inside.

You can’t back out because the door always closes with a juddering sound that’s bound to attract attention.

And you can’t call the police because whoever’s broken in might hear you.

And then you hear a woman whimpering and moaning. ‘Let me go.’

And, of course, Rachel reacts as any mother would with spectacularly fatal consequences.

The intruder, who it turns out isn’t an intruder at all, ends up dead and Rachel and Beth find themselves embroiled in an increasingly desperate cover-up.

It’s probably the most gripping opening to any novel I’ve ever read and author AJ Waines doesn’t allow the pace to slacken.

Don’t You Dare fairly sizzles as Rachel battles to protect both herself and Beth from discovery and to ensure their dreadful secret doesn’t jeopardise Beth’s forthcoming wedding to Peter, a slightly-too-good-to-be-true producer in the film business.

When barmaid, Rachel, discovers her soon-to-be-married daughter, Beth,​ pinned down by a stranger in the pub cellar, Rachel lashes out in panic and the intruder ends up dead.

In desperation, Rachel convinces Beth they should cover up the crime and go ahead with the planned wedding in one month’s time.

Rachel, however, has her own reasons for not involving the police.

Hiding their dreadful secret is harder than they both imagined and as the big day approaches and the lies multiply, Beth becomes a liability.

Rachel looks on in dismay at the hen party​ ​when, after too many drinks, Beth declares she’s about to make a special announcement.

But before Beth can say a word, she disappears…

When two people share a chilling secret, can both hold their nerve?

This book explores the dark side of a mother-daughter relationship when pushed to the limit.

It will appeal to fans of authors like Ruth Ware, Clare Mackintosh and C.L. Taylor.

The story works on a number of different levels: as a crime thriller it’s an absolute cracker – impossible not to admire Rachel’s resourcefulness when she comes up with an unusual plan to hide the body.

It also offers an interesting exploration of what happens when a mother becomes too obsessed with micro-managing a daughter’s life. 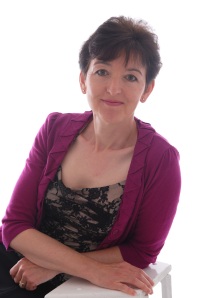 Tension mounts as Beth begins to buckle under the strain of pretending nothing has happened and Rachel becomes increasingly desperate to guarantee her silence and keep the wedding plans on track.

Waines writes with confidence and assurance – as you’d expect from a writer whose number one bestseller Girl on a Train topped the UK and Australian kindle charts in 2015 and 2016 – and there are enough puzzles and surprises to keep the reader guessing everyone’s motives.

It all leads to an exciting climax where no-one turns out to be the person they first seemed – least of all Rachel or Beth.

And, just when you think, happy ever after is on the cards, Waines chucks in one last bombshell.

A page-turner from start to finish.

3 thoughts on “Review: Don’t You Dare – an assured new thriller from Girl on a Train’s AJ Waines”