The House of Hidden Mothers 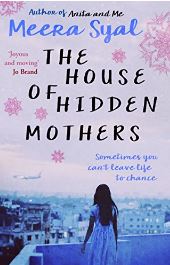 Once upon a time I had no scruples about giving up on a book: if I wasn’t gripped a quarter of the way in¸ I chucked it into a corner and forgot about it.

And then I joined a book club and it became morally incumbent to carry on reading to THE END.

But, oh, Myra Syal’s third novel The House of Hidden Mothers was a real test of endurance.

It sounded so promising too: London-based Shyama, 48, sophisticated, independent, and educated, wants a child with her much younger partner.

Meanwhile Mala, 25 years Shyama’s junior, intelligent and ambitious but trapped in an oppressive marriage, dreams of escaping her husband and the poverty of her rural Indian village.

The two meet at the House of Hidden Mothers and work together to realise their dreams.

But will they find happiness?

Unfortunately, it doesn’t take a genius to work out the answer because Syal signals plot twists and turns with all the subtlety of a bricklayer trowelling cement.

It’s such a shame because the first quarter-or-so of the novel has some interesting things to say about how far women are prepared to go to get the life they can’t have.

There’s food for thought too about the nature of the dilemmas facing Western women and their Third World counterparts.

And, the sub-plot involving Shyama’s parents, and their decades long battle to secure the right to live in their own Delhi retirement home, offered a fresh take on the tensions between those who build a ‘better’ life in the west and the family they leave behind.

But, the additional sub-plots featuring Shyama’s long-time friends and Tara, her troubled university student daughter, proved a tangle too much.

Better to have consigned their stories to the pages of another, separate, book rather than clogging the pages of this one.

Ditto Dr Passi from the Assisted Reproductive Technology centre – that’s a baby farm to me and you.

Her motives for setting up the surrogacy clinic may well have been as noble and disinterested as Syal told us they were, but did we really need pages and pages of Dr Passi’s back story and almost every other passing minor character too?

The same goes for the multiple points of view, which are usually a good way to add depth and perspective.

But, if you’re going to change POV you’ve got to be a little bit subtle about it. That means not changing viewpoints within the same chapter and ‘showing’ rather than ‘telling’ what a character is thinking and feeling.

Perhaps I’d expected too much from this book: I loved Syal’s much earlier novel, Anita and Me, for instance, and was expecting something equally sparkling.

Certainly, The House of Hidden Mothers attracted some stunning reviews from the likes of Jo Brand and Esther Freud when it first appeared in 2015. (Were they reading the same book?)

Anita and Me is still sitting on my bookshelf today.

Sadly, The House of Hidden Mothers won’t be taking up residency.