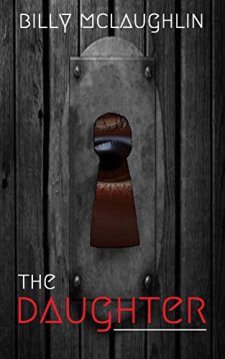 Readers who have watched the TV show Long Lost Family will be familiar with the moment when separated family members are finally brought face-to-face.

There’s one such moment in Billy McLaughlin’s new crime mystery The Daughter where Kate, partner of the novel’s main protagonist Detective Inspector Phil Morris, knocks on the door of her long lost father.

According to the television script they should fall into each other’s arms amid floods of tears and mutual outpourings of love and affection.

It doesn’t happen quite like that in The Daughter because Kate’s dad is not quite the person she first thought.

It’s one of a number of plot twists that keeps leading the reader down the garden path, only to swerve in another direction entirely.

The story opens with the discovery of the body of a young woman whose hands and teeth are missing.

Phil and his partner Detective Donna Barclay struggle to identify her.

The evidence initially suggests she is local missing girl, Alex Waters, whose mother, Tricia, comes armed with a psychic gift she would rather not possess.

As the police try to untangle the web of mystery surrounding the body, it appears Alex had more secrets than even her psychic mother knew and Phil and Donna are pushed to their limits trying to unravel the disturbed mind behind the sick game playing out around them.

Told from multiple viewpoints, which is an interesting way to present a novel that is part thriller and part domestic noir, it took a little while to get properly inside the head of one or two of the narrators.

Tricia, in particular, is a difficult one: partly because the paranormal element felt initially a bit off-the-wall and partly because she’s a little too full of self-pity to be entirely sympathetic.

But, as the story progresses, everything begins to come together in a most unexpected way.

And, the killer, who really isn’t who you thought it would be, will make your blood run cold.