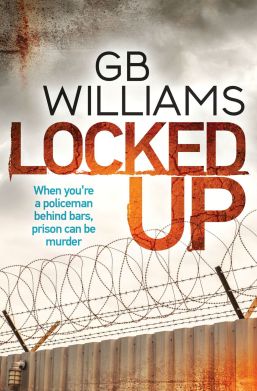 It’s not something I’ve ever considered before, but when someone is murdered in prison the best person to find the killer is a policeman who’s already locked up.

And that’s the interesting premise behind Locked Up, the new crime mystery from GB Williams.

Former detective sergeant Charlie Bell is serving time for the killing of Phillip Mansel-Jones, a ‘scumbag of the worse degree’.

Charlie has no regrets – as well as money laundering, Mansel-Jones was known to be involved in drugs, guns and prostitution. And kidnapping and rape – and the victims were getting younger.

In the absence of evidence that would stand up in court Charlie decided to stop him – for good.

In prison he focuses on keeping his head down and getting on with his sentence. But in a world of ‘them’ and ‘us’, both prisoners and warders consider him ‘them’.

Everything changes, though, when prison officer Ariadne Teddington asks Charlie to investigate after Tommy, a small-time crook is found dead.

The official line is that Tommy committed suicide, but Teddington suspects a cover-up.

This is an unconventional murder mystery – HMP Blackmarch is a closed world, with a rigidly policed hierarchical structure where rival gang bosses have no qualms about taking whatever steps are necessary to maintain their position.

Charlie, of course, is intrigued by Teddington’s request, but after three years of staying out of trouble and keeping his nose clean ‘by not inserting it into other people’s business’, he’s not sure he wants to jeopardise his chances of parole and being reunited with his son Oscar.

But, as Charlie mulls over the case, he realises that something inside him has woken up.

Question is though: can he and Teddington, both now on different sides of the law, solve the case?

Their hunt brings them face-to-face with some vicious men and a dangerous stand-off where Charlie faces difficult choices.

As you’d expect from a writer who was shortlisted for the 2014 CWA Margery Allingham Short Story Competition, GB Williams leads the reader on a tense, carefully plotted journey.

There are plenty of twists and turns along the way, and some good examples of an author ‘showing’ rather than ‘telling’.

Charlie, for instance, has been denied access to the gym so instead exercises inside his cell: sit ups, dips, press ups, squats, the plank, T stands. ‘Sixteen reps, three repeats, three circuits.’

Now that’s a man on a mission.

There’s lots of interesting detail too about the realities of life on the inside – breakfast porridge that is ‘a concrete mess, even more uninteresting than porridge usually is’.

And, there’s food for thought too about the purpose of prison and whether it’s about being punished inside or whether being inside is the punishment?

Should Charlie have been Locked Up  in the first place?

And what will happen to him next?