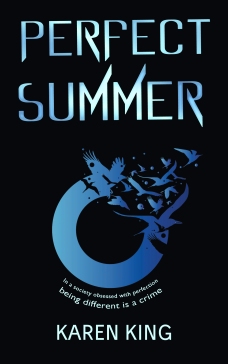 Former magazine journalist Karen King, whose writing career started on the iconic teen magazine Jackie, is hoping for a perfect summer with the re-publication of her debut Young Adult novel, Perfect Summer.

The book, a futuristic thriller set in a society obsessed with beauty and perfection where it is a crime to be disabled, was runner-up in the Red Telephone Books YA novel competition in 2011.

Now re-published by Accent Press, Perfect Summer is the story of what happens when 15-year-old Morgan’s younger brother Josh is kidnapped.

Josh has Down’s syndrome and the authorities aren’t interested in his disappearance so Morgan and best friend Summer, who is rich and beautiful and has a seemingly perfect life, decide to find him.

But soon they find themselves in terrible danger.

Can they find Josh before it’s too late? And is Summer’s life as perfect as it seems?

Karen, who spent many years writing for various children’s magazines, including Thomas the Tank Engine and Winnie the Pooh, is the author of over 120 children’s

books as well as two YA novels, Perfect Summer and Sapphire Blue.

She is also the author of two romance novels, and has been contracted for three chick lit novels by Accent Press.

When she isn’t writing, Karen likes travelling, watching the ‘soaps’ and reading.

Give her a good book and a box of chocolates and she thinks she’s in Heaven.

Available to buy on Amazon from May 10.

Later that evening, totally beautified, flawlessly made up and dressed in our finery, we got into a hire car with Leo and Tamara and set off for Roxy’s. As we drove along the riverbank towards the exclusive nightclub, I noticed the trail of glamorous people winding along the pavement like a colourful, exotic snake. Butterflies fluttered in my stomach. When we got nearer, and I saw how stunning the girls in the waiting queue were, the butterflies took flight and my stomach went with them.

“Look at all those people waiting to get in,” I stammered. “What if we’re turned away?”

Leo smiled at me. “How could they turn away two gorgeous girls like you?”

I hoped he was right. I didn’t think I’d get over the humiliation if I was. Not only would it be cringingly embarrassing, it would also ruin the evening for everyone as Summer and her family would probably leave with me.

The hire car dropped us outside the building, then Leo and Tamara led us right to the front of the queue, the stares and whispers from people as we walked past made me feel like a celebrity. Two bouncers barred the doorway, legs wide, arms crossed. One was an exotic flame-haired woman dressed in a slinky black dress with slits right up to the thighs. The other, a drop-dead gorgeous blond hunk, wore tight black trousers and a white shirt open to the waist to reveal a tanned, toned torso. I was so nervous I thought I was going to be sick. But I needn’t have worried. The bouncers both gave us wide smiles.  The man said, “Good to see you again, Mr Maddison, Ms Price.” Then they stepped aside to let us through, without a second glance. I couldn’t believe it. I was actually going into a nightclub, and not just any old nightclub, the nightclub. I felt like I was floating on air.