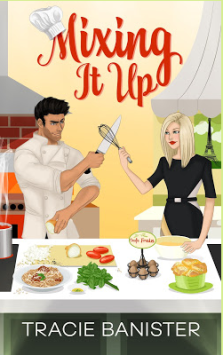 Warning: Before you open Tracie Bannister’s latest Chick Lit feast, make sure your fridge is well-stocked with scrummy treats.

Because, sure as eggs are eggs, Mixing It Up will tickle your taste buds.

An executive shake-up has seen a new CEO, Devlin Hayes, take over.

He wants to spice up the network – and that means re-branding Cecily’s show and introducing a new co-host, mercurial Italian chef Dante Marchetti.

His efforts to upstage her make Cecily’s blood boil.

But viewers love their chemistry and, as Cecily fights to maintain the integrity of her show, she finds herself wondering whether she really belongs on TV or would her culinary passion be better served elsewhere?

Bannister’s fourth novel (Twin Picques, In Need of Therapy and Blame it on the Fame) is a tasty smorgasbord that will keep you guessing almost to the last page.

Racily-written, it is sprinkled with fabulous one-liners.

Favourites include:  ‘…a megawatt smile that could probably melt the cheese on a veal parm faster than a salamander broiler…’ and ‘…the brain of a cheese sandwich (without butter)…’

The frequent product-placement references – ‘The Carter, not the Van Cleef bracelet’, for instance – are less digestible.

But, ultimately, they simply slow the storytelling.

I’d have liked a little more of Cecily’s grande dame grandmother though.

She was a delight.

And, overall, so too was the book.

To borrow a phrase from Bannister: it takes the lemon ricotta cake.

Mixing It Up is available to buy on Amazon.