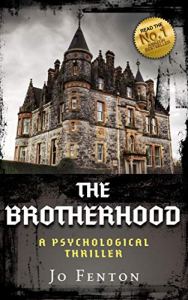 It’s the stuff of nightmares – or mine, at least. A bullying ex-boyfriend, a totalitarian religious sect, and a remote abbey that’s more like a concentration camp than a haven. The chills are coming quick and fast.

Add an abusive, albeit charismatic, cult leader and a team of violent wardens, who enforce the leader’s rules with brutal efficiency, and Jo Fenton’s psychological thriller The Brotherhood is one hundred per cent a rollercoaster.

At first, Melissa, who falls back on her faith after the sudden death of her parents, is captivated by Dominic, a minister, who’s supporting her through her bereavement. END_OF_DOCUMENT_TOKEN_TO_BE_REPLACED