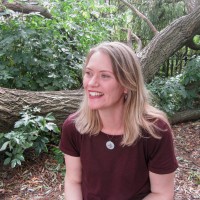 Find out why author Shelly Berry is grateful she never acted on an office crush and how the experience inspired the plot of her new novel Outreach.

Also learn why her days as a girl guide mean she always likes to ‘Be Prepared’ and why she’s worrying about moving house.

And don’t miss out on a chance (UK entrants only) to win a paperback copy of Outreach.

Shelly Berry.  That’s my pen name anyway – I’m not telling you my real one!

My mum and dad live in Nottinghamshire and have lived in the same house since we moved there from the North East when I was about one.  They are both retired now and love annoying each other.

My sister is a Reader at Bradford University and a massive inspiration to me and others – she has achieved so much at a relatively young age, and as a woman working in science, has become a bit of a role model for women working in her field.  I suspect she will become a professor before she is 50.

County Durham.  I was a baby when we moved, but my North Eastern roots are very dear to me.  It’s a part of the world that has really taken an economic beating over the last 40 years, but it’s beautiful and the people are so friendly and down to earth.

But now live in…

London.  I’ve been here since I graduated from university in 2001.  I’ve lived in south, north and now east London, and suspect I will never afford to live in the west.

Every now and then I think about moving out as it is a crazy place… but I’m not ready to leave it yet!

I bought in on my own five years ago, and I’m immensely proud of that – getting on the property ladder as a single person in London on a public sector wage is not easy!  I’ve made it my own too, with lots of upcycled second hand furniture which I have painted or covered in decollage.

One thing I’d change about me…

I’d like to be braver and more outspoken. I’m better than I used to be, but worry way too much about what other people think.  It’s a work in progress…

One thing I wouldn’t…

A colleague once told me I’m tenacious.  I love that!  It means I get things done – and I don’t let other people off the hook if they have responsibility to get something done too.

Another really tricky question.  Margaret Atwood is definitely having a moment right now, and I really admire her writing.  But then there are many others that I love too, including Zadie Smith and Donna Tartt.

Favourite book to read with my children?

I don’t have any children, but kept all my Roald Dahl books from my own childhood.  I would love to share his world with a little person.

What keeps you awake at night?

I’m hoping to move in the next few weeks, but the solicitors haven’t dotted all the I’s or crossed all the T’s… until I have a bit more certainty that it’s actually going to happen, I won’t be able to relax.

The state of the planet really worries me too.  The amount of plastic that isn’t recyclable and gets thrown away is really niggling at the moment.

How many hours a day do you spend on your phone?

Not a huge amount I don’t think, and certainly less than my partner!  Maybe an hour?  I’ve probably been using it a bit more recently as I’ve been using social media to promote my novel Outreach quite a lot – which reminds me, I need to Tweet… #amwriting

What’s in your bag right now?

Way too much stuff – my wallet, diary, a notebook, a make-up bag stuffed with lipstick and paracetamol, a brolly, glasses, sunglasses, pens, keys, passes for work, tissues and a tote bag.  I was in the Girl Guides for a very short period of time, but the “Be Prepared” motto seems to have stuck.

I have three mobile phones in there too – my personal one and one for each of my day jobs – I work for two different charities in my work as a counsellor.

What you don’t know about me?

I’m writing this in bed!

When I was much younger I had a crush on my boss.  Luckily for both of us, I didn’t do anything about it – apart from anything else, he was married with kids, so was well and truly off-limits.  But wondering what would happen if someone let the fantasies that accompany a crush get out of hand was certainly the inspiration behind Outreach… 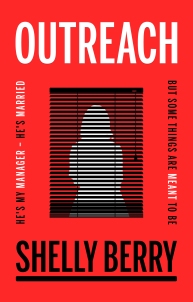 When Emily was offered a new job in London, she was sure that her life was about to change – new friends, a career in the big city and the boyfriend she always wanted.

Her new life turns out to be more complicated than she expected. Her flat mates don’t understand her. Her colleagues mock everything about her. Even her father doesn’t support her. The only person who offers her any encouragement is David.

He’s married. He’s her manager. To Emily it’s clear that they have something special. As their relationship develops, everyone seems to want to sabotage their chances.

But some things are meant to be…

Available to buy on Amazon and also here.

Shelly Berry lives in Waltham Forest, London. Having gained a BA Joint Honours Degree in Visual Art and Sociology at Keele University and a Diploma in Therapeutic Counselling, she has since worked in the public sector with vulnerable adults and children – including those affected by mental illness, drug and alcohol misuse, disability, criminal behaviour, homelessness and domestic and sexual abuse.

During this time, Shelly developed and nurtured her love of writing.

As well as writing fiction, she has previously written for a number of blogs and now writes for the Waltham Forest Echo.

The winner will be selected at random via Rafflecopter from all valid entries and will be notified by Twitter and/or email. If no response is received within 7 days then Rachel’s Random Resources reserves the right to select an alternative winner.

Open to all entrants aged 18 or over.

Any personal data given as part of the competition entry is used for this purpose only and will not be shared with third parties, with the exception of the winners’ information. This will passed to the giveaway organiser and used only for fulfilment of the prize, after which time Rachel’s Random Resources will delete the data.

Book Lovers’ Booklist is not responsible for despatch or delivery of the prize.