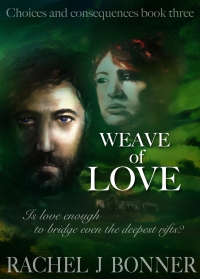 In a futuristic world, ripped apart by a devastating war, Leonie hovers on the brink of death after harnessing her extra-ordinary mental powers to save the victims of a horrible explosion.

Husband Perry, a former monk, who showed Leonie how to harness those powers, is wracked with guilt.

And, though, he knows she is receiving the best possible care from his former brothers at the monastery of the House of St Peter, he is tortured with thoughts of ‘what if?’

Meanwhile, his mentor, and Leonie’s adopted father, Lord Gabriel, who has long known Leonie is the key to ending the feudal wars that are tearing their world apart, worries his peace-keeping efforts may be in vain…

Weave of Love is the third instalment in Rachel J. Bonner’s Choices and Consequences series.

Without a doubt, as Bonner points out in her author’s introduction, readers who’ve already read books one and two, and who are familiar with the back story and the main characters, will get a lot more from book three.

However, Bonner’s helpful ‘previously-in-this-series…’ section, that sketches out key events in the other books, went a long way towards bringing newbies, like me, up to speed.

Even so, the early part of the narrative – which focuses on Leonie’s battle for survival, and Perry’s fears for her – sometimes felt a little slow.

Sadly, unless a reader has already invested in Leonie and Perry’s story, Leonie’s sojourn in the sick room is inevitably somewhwat lacking in dramatic tension.

Things picked up in the second half when Lord Gabriel started pulling the reins a little and the significance of the Prologue, became clearer.

So, would I recommend Weave of Love? Yes, Bonner writes with fluency, and, by the end, had captured my interest. But I do think readers should take her advice and read books one and two first.

Me? When I’ve got time I’ll be doing the same. 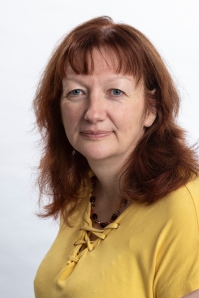 Rachel J Bonner is the author of the four book Choices and Consequences series.

The first book in the series, Strand of Faith, was published in November 2018. Book 2, Thread of Hope, released on 2nd May 2019, followed by Weave of Love on 24th October, and Cloth of Grace at the end of February 2020.

Getting a degree in engineering, followed by a career in accountancy is probably not a conventional path to becoming an author, particularly in fantasy or romance.

Rachel says that, although accountancy isn’t anything like as boring as everyone thinks, writing is a lot more fun.

When not writing, she can be found walking in the beautiful countryside near where she lives, which has influenced much of the scenery in her books, or shooting things with her local archery club.  Shooting targets only, honest.  Nothing to worry about. (Okay, sometimes we shoot Polo mints. Or cabbages. Still nothing to worry about.)

You can find out more about her books and sign up for Rachel’s newsletters at www.racheljbonner.co.uk.

Weave of Love is available to buy on Amazon, Associates, Other Retailers and Google Play.