@Bang2write, @rararesources, How Not to Write Female Characters

Forget stereotypes and box ticking: from Kick-ass Hotties to Mom Warriors, tarts with hearts and Crying WAGS – it’s all about the writing.

Or, as Lucy V. Hay puts it in her punchy, concise e-book guide How Not to Write Female Characters, it’s about GOOD WRITING.

She’s spent the last 15 years reading the slush pile and has learned to spot the patterns, pitfalls and general mistakes writers make when writing female characters – and why.

In How Not to Write Female Characters Hay outlines:

How Not to Write Female Characters is essential reading for both aspiring and established writers.

For newbies it’s a practical starter-kit on how to create well-rounded female characters, who help push a story forward.

Those with more writing experience will find plenty of tips and suggestions that’ll give their writing, and their characters, emotional depth.

Hay writes succinctly and persuasively, using examples from films, television and novels to illustrate how to give audiences female characters they’ll believe in.

In a nutshell, it’s about good writing and good stories.

And those who don’t?

Hay’s advice? ‘Forget about them.’

Female characters, she believes, can be absolutely anything a writer chooses them to be. ‘Just choose wisely, for the sake of your STORY.’ 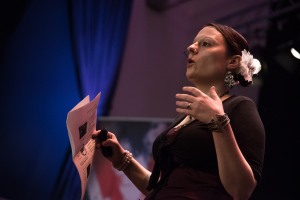 Lucy V. Hay is an author, script editor and blogger who helps writers via her Bang2write consultancy.

She is also the producer of two Brit thrillers, Deviation (2012) and Assassin (2015), as well as the script editor and advisor on numerous other features and shorts.

Lucy’s also the author of Writing and Selling Thriller Screenplays for Kamera Books’ Creative Essentials range, as well as its follow ups on Drama Screenplays and Diverse Characters.

For a chance to win a paperback copy of Writing Diverse Characters for Fiction, TV or Film by Lucy V. Hay like and comment below before midnight on July 09, 2019. One winner will be chosen at random. UK only.

6 thoughts on “Review: The secrets of How Not to Write Female Characters from Lucy V. Hay”